The Black Box production of the Harry Gibson’s stage version of the Irving Welsh’s novel “Trainspotting” was outstanding and full of merit. The mainstay of its success were the consistently strong performances by the ensemble of Damien Carr, Taylor Beadle-Williams, Leigh Scully and Brendan Taylor. By the end of Act One any small misgivings about the script and its subject matter were erased by its polished, crisp and seamless delivery in the hands of the four young inner West Sydney actors.

Taylor Beadle-Williams delivered poignantly polished and lightly baked portrayals of four females – Alison, Lizzie, June, and Lizzie. Her short monologue vignettes in Act Two were stunning in their light grace and clarity. It is hard to believe that Leigh Scully stepped into the production, and his three diverse characters, only a week before the opening of Black Box’s Sydney Premiere in May. His presence in all roles was adroit, defined and commanding. Damien Carr well acquitted the lead role Mark Renton with a quiet reflexive presence. It was when Renton takes up a journal towards the end of Act One that the audience truly begins to identify with the characters and the motivation for their desperate addiction. Brendon Taylor was well up to the roles of his characters – his performance was lucid and strong. 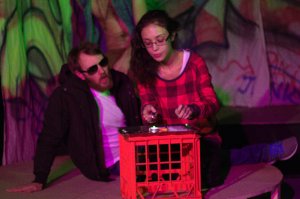 It might sound gratuitous to praise the depiction of heroin addiction and its effects – but any reservations one might have about the theatrical merit of the subject matter of this play are well overcome by its delivery. The depiction of hallucinatory states was consummate and immediate. There is a strong rationale for plays about the gritty “underbelly” of society, including its drug culture. I have questions however about Gibson’s uneven treatment of his difficult subject. There were moments in the Second Act – of random, extreme violence and the prurient play with a tampon – that seem unmotivated and fail to engage the audience as well as many other moments in the play. The violence seems to offend our current sensitivity about “coward punches”.
Yet the production – including Luke Berman’s methodical and crisp direction – enhanced the script, and triumphed with whatever challenges the play presented.

The pioneering theatrical use of the Vault venue in Port Kembla was interesting, and worked well. The set worked, as well as the unusual spaces of the unused bank building. Lighting was limited but more than adequate. It is very pleasing to see this type of independent production in the Illawarra. The unkempt and deserted back lanes of Port Kembla – just outside the venue – raised a question. If this story of urban desperates was to be staged in an old industrial town why couldn’t a deserted shed, shop or warehouse be used for its staging? However the vault venue was part of Berman’s larger picture to stage more independent theatre in Wollongong – and the choice of this venue for that goal was not disappointing.
This production deserves to be seen by very many in Wollongong. “Trainspotting” was one of the best, arguably the best, independent production I can remember in Wollongong for many years.