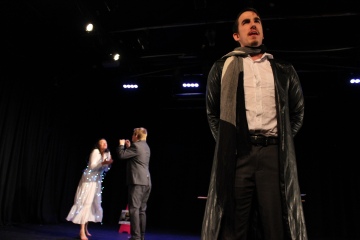 Our second and final week of short plays has come to a close at the Bridge Street Theatre Coniston. Congratulations to all our actors, directors, writers and production team on a hugely successful inaugural season of short plays.

People’s Choice:
1st Place: OH NO A GHOST
2nd Place: SLOW DATING
3rd Place: CONTEXT
4th Place: WAITING FOR MASTERCHEF
As the script for Slow Dating has already been produced in Short+Sweet Sydney, Context advances to Short+Sweet Sydney 2019 along with Oh No A Ghost.

After the success of the first 8 plays that started Short + Sweet Illawarra at the Harbour Theatre Shellharbour, the Bridge Street Theatre hosts a second helping of 10 short plays to finish off this year. With a diverse range of plays, such as absurdist comedy to monologue to relationship drama to paranormal farce. The prestigious short play festival is further proven to have found a comfy new home in this area that thrives on its local talent. 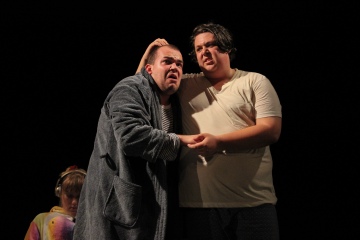 A high energy absurdist comedy about three young people who try to find meaning while waiting for Masterchef to come on television and debate what to with their time, such as play Nintendo Wii, insult each other or gossip about the word “yeet”. Filled with laugh-out-loud moments from the great delivery and intensity of the three talented actors. Gallagher and Ward play off each other outrageously while Bentley owns the stage in her pivotal moment. Inspired writing and clever lighting/sound also help this piece make it to 4th place for audiences and judges.

Six people reflect on an incident on the train the day before where a tradie (Szwec) called an Islamic girl (Ryma) a terrorist. Told mostly in monologue, the piece starts with a charming, likeable performance by Ryma. The witnesses played by Vaccaro, Vohradsky and Le all turn in good solid performances while Szwec finishes off with a strong charismatic end. 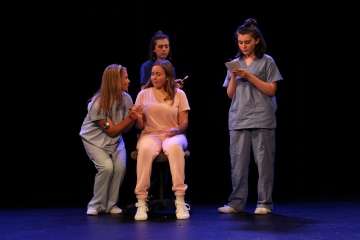 Set in a woman’s womb, a fetus, about to be born, has second thoughts about leaving the comfort of her current home. This piece mixes its comedy and poignancy in this interesting surreal concept in which nurses treat the unborn sentient child and tell her what to expect in her upcoming life.

This play begins as a young woman (Champion) and a young man (Chadwick) check each other out at a nightclub before he makes a move. This romantic comedy has them debate the meaning behind actions such as eye contact and where it’ll lead to. Chadwick and Champion utilise their solid, charming performances in this entertaining piece as their conflict and eventual chemistry wanders the stage

Mike (Baker) is nervous about hosting a dinner in which he’ll be introducing his girlfriend Terri (Sassall) to his brother Jack (Johnstone). Great nuanced performances by all three while they all conflict with each other over religion, political differences and their history with Mike. This drama brings three interesting characters to the table and it provides a solid short play, thriving on how it deals with the relationships of its well-written roles with plenty of funny moments too. 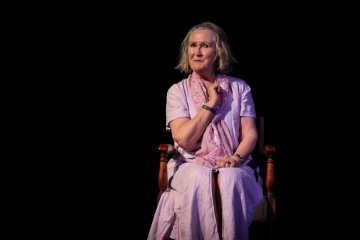 The first solo monologue piece of the night, Slow Dating stars Hunt as Ester, a happily married woman in her seventies who stumbles onto a speed dating event which aroused her curiosity. Hunt tells Ester’s story quite pleasantly as she wins the audience over immediately with a dementia joke and ventures on into other racy humour before getting to the more emotional side. Audiences were interested in this piece from beginning to end, with one even saying it was the best monologue he’d ever seen. Very easy to see why it was 2nd place in both the audience and judge’s vote.

Witty script, fast-paced action, creative concept and brilliantly performed comedy dominates the evening in this story about paranormal activity. A real estate agent named Alex (Grenfell) tries to sell a house where the ghost of a murder victim named Jessie (Severino) stays to haunt. Both of them shine hilariously in their roles and play off each other excellently, while Ashton hysterically moves around the stage covered in black, carrying the objects that Jessie uses her ghost powers on. Sam Lovell plays a psychotic murderer named Sam whose delivery was side-splitting, from the simplest of sentences to the craziest of rants. A no-brainer for winning 1st place amongst judges and audiences and very deserving of its opportunity to be performed again in Sydney. 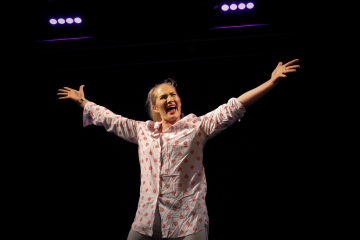 The second and final monologue of the night is a comedy by a stand-up comedian. Belonogoff hilariously ponders her future love-life while dealing with tinder, ordering Chinese food and drunkenly hallucinating a theatre audience. She revels in her own cringe-worthy mannerisms with great energy and calculated comic timing. Hardly a standard monologue, she also utilises some audience interaction, responding to a voice-over and gets shot down while wearing a bra on her head. Interestingly showcases a blend of stand-up comedy, short theatre and monologue. 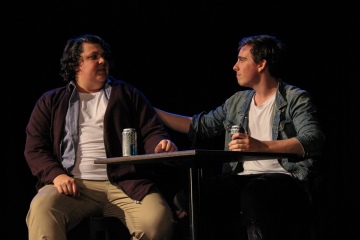 A uniquely innovative piece that thrives on it’s gimmick, Context tells a standard break-up story but it’s how the story is told that’s the hook. All four characters only speak in their thoughts and descriptors, such as “answering my phone in an annoying sing-song voice” and how they’re feeling about what they’re actually saying. Ward gives his second brilliant performance of the night in the lead role, being completely sympathetic while finding the right balance between naturalism and surrealism in his lines. Harris plays his ex-girlfriend with an impressive emotional depth, while Meers and Chadwick provide great comedic relief as Ward’s mother and best mate respectively. This is a gimmick done right as it never stops being insightful and is full of laughs and subtle emotions.

Phil (Clayden/Sweeting) is an actor portraying the world’s greatest superhero Nightstick on a film set and he’s gone a little too method. This hysterical play mixes juvenile penis jokes with quick-paced slapstick and awfully suggestive superhero costumes. Clayden’s energy and intensity are remarkable and his co-star Casey (Jarrett) as his sidekick Red Rocket matches him hilariously. Groombridge and Murphy perfectly round off this cast as the film’s director and Nightstick’s arch nemesis / ex-lover The Battered Beaver respectively, with very funny moments of their own.

Overall, the first Short + Sweet Illawarra was a wonderful success with plenty of interesting scripts, sophisticated direction, talented actors, great theatres and an audience full of laughing and moved audience members. Lots of accolades, surefire hits for Sydney next year and a pool of talent with eager anticipation to be involved in S+S Illawarra next year. What a fantastic success.