Congratulations to all three of our short plays which performed in week four of Short+Sweet Sydney 2018. All three plays impressed, with both The Quality of Life and Badda Bing Badda Bang being chosen to advance to the finals series! 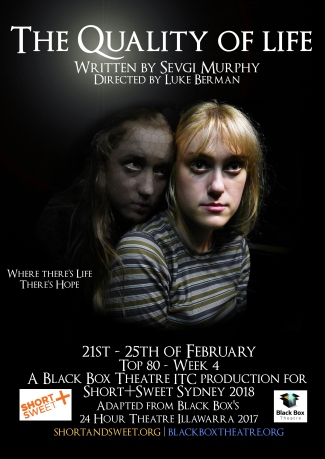 In the Top 80, Sevgi Murphy’s The Quality of Life won best production by both Judges and People’s Choice voting, and has been invited to advance straight to the high profile GALA FINALS 5th – 7th April 2018 at the Tom Mann Theatre. They will perform alongside the best plays of the festival. Congratulations to the cast (Sophie Bentley, Nat McConchie and Beth Fuller), our writer Sevgi Murphy and director Luke Berman. 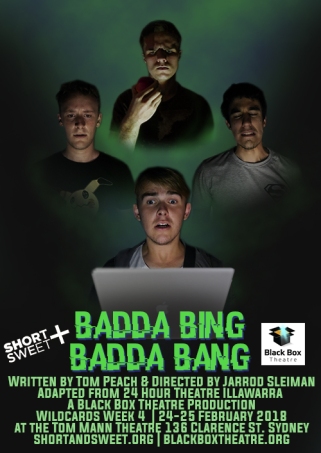 In our Wildcards, Tom Peach’s Badda Bing Badda Bang advanced to the WILDCARDS FINALS after winning People’s Choice and was also runner up best production as voted by the Judges. It will be fighting to join the cast of Quality of Life in the Gala Finals.
Wildcards run 31st March – 1st April. Congratulations to writer Tom Peach, director Jarrod Sleiman and cast Bryson Grenfell, Sam Lovell, Sam Sweeting and the very brave James Turnbull, who finished their play (and curtain call) with a split lip requiring 6 stitches!

The Human Trap written and directed by Alexander Cuff was also hugely successful, finishing 2nd place in People’s Choice voting in what was a very strong Wildcard line-up. Congratulations to Alexander Cuff for his wonderful leadership and direction, and to his cast Dylan Horvat, James Turnbull, Alex Groombridge, Jarrod Sleiman and Vu Moyo.

Black Box Theatre would like to extend a massive THANK YOU to fellow actor James Coates who kindly drove James to hospital immediately after the final Wildcard performance – James made it back just in time to learn that his Wildcard piece won best play in judges voting and will join Badda Bing Badda Bang in the Wildcards final. Your victory was well deserved with a beautiful piece about love and separation, and we look forward to seeing you in a few weeks!

A huge thanks also goes to audience member and Black Box member Glenn Wanstall for his support at hospital, and getting James back to the theatre following his stitches. This goes to show what wonderful love and support is generated by the festival, and Black Box Theatre is indebted to both James and Glenn, thank you to both these wonderful human beings.

We had a huge amount of support also from Wollongong audience who made the trek up to the city to support our shows, and we hope to see you again for our finals charge!