Theatre is for people who can’t handle reality. But, though it can be mind altering, it’s a wiser choice than most illicit substances.

Thematically, this play shouldn’t interest me. I’ve never been much into drugs. (In fact, in 1996, whenever my friends would begin raving about the movie, I’d quietly slip away to the bar again.*)

But this production, directed by Luke Berman, is terrific. The cast of four create – with extraordinary energy, courage and commitment – the world of drug addled 80’s Edinburgh. 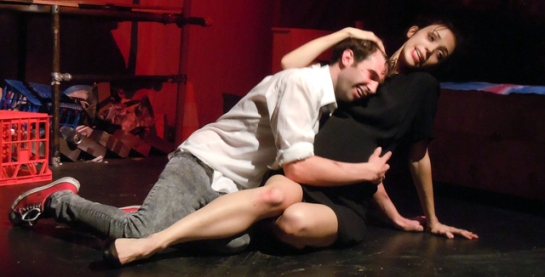 Damien Carr plays Mark (whose story we most closely follow) with a winning, empathy-inducing stage presence. Taylor Beadle-Williams plays an array of ‘lassies’; beautiful portraits of tough women doing it hard in a misogynistic culture. Brendon Taylor’s scene as an unwillingly witness to sexist violence, with his fear that he must intervene, is magic. Leigh Scully perfectly captures a variety of imposing and physically threatening male characters, only later to display an extraordinary range when he so convincingly plays Mark’s mother.

When Life has become a disease, whose symptoms are boredom and disappointment, a cure will be sought. This play presents the desperate measures people take to self medicate, often with catastrophic consequences.

This is confronting theatre. There’s sex, violence and two hours of Scottish accents. And it works.

It’s both funny and horrifying. It’s hard to imagine how anyone ever thought this tale glorified drug usage. It doesn’t preach – it’s far too cool for that – but honesty is the most powerful pedagogy.

As I began by saying, thematically this show shouldn’t be my cup of tea. I don’t have much patience with people who find Life dull and disappointing. (My parochialism, no doubt, the result of being privileged enough to sit around comfortably drinking too many cups of tea. And fine red wine.)

But this production is eye opening, sympathetic, electric.

And it does what theatre can do so well, throw open windows to other, sometimes harsher, realities.

*Trainspotting is very conscious of the dangers of that most commonly abused of drugs – alcohol.